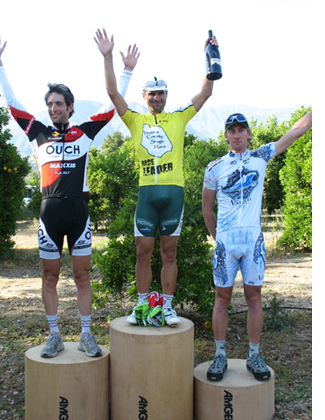 The Liquid Fitness/Adago Energy Elite Team contested The Ventura County Stage race, a new and up and coming event on the So Cal calendar.

That evening in the downtown twilight criterium (also hilly and technical), top US pro rider Neil Shirley (Kelly Benefits), wearer of the red climbers jersey, put the hurt on.  In the end only Rudy (Liquid/Adageo) could stay with him.  An unfortunate chain slip with two laps to go gave Neil the advantage.  Rudy finished second (to thunderous applause) with Justin coming across with the pack in 4th.

Going into the final stage, the team held 2nd and 3rd and wore both the green sprinter’s jersey (Rudy) and the red climber’s jersey (Justin).  The guys once again rode beautifully but the might of Neil and Roman Killun (Ouch) could not be matched.  Matt and Justin mounted an inspired chase and in the end came across in third and 5th with Justin holding on to third, the only amateur on the podium.

In 3 days of racing the team held the yellow, red and green jerseys, had a first second and third place finish and as famed cycling announcer Dave Towle said during the podium ceremony, the Liquid Fitness/Adago Energy Elite Team is the next team to watch. 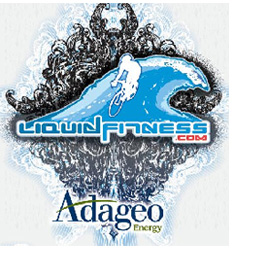 Liquid Cycling, a world-wide club for cycling enthusiasts, promotes good sportsmanship and a positive attitude towards the sport of cycling.   The club supports racing at all levels and is led by an elite team of world class racers.

Adageo Energy will be the Co-Title Sponsor of all club teams which will now go by the moniker, Liquid Fitness/Adageo Energy.